Binance VS FTX: what is happening between the two crypto giants?

It is no secret that in the market, whether it is a spontaneous market in the city or a cryptocurrency market on the network, there is such a concept as "competition", where sellers compete with each other to get customers' attention. The crypto market operates on that principle as well, with Binance and FTX being two examples of serious competitors. Recently, the community was flooded with news about FTX crash and Binance CEO's successful trick. Let's find out where the roots grow.

The war between Binance and FTX. How did it all start?

The third of November became a fateful date for most market participants: it was then that the Coindesk service presented to the public a report, according to which it turned out that the crypto hedge fund Alameda Research and the cryptocurrency exchange FTX, created by entrepreneur Samuel Bankman-Fried (known as SBF), are in a bad position. This conclusion was made as a result of the predominance of FTT tokens (FTX exchange utility token) on the fund's balance sheet, and, consequently, the company's dependence on the state of the exchange. The tokens themselves were called illiquid and "created out of thin air" and have no collateral. At the same time, neither Alameda CEO Carolyn Allison nor Sam himself gave any comments to journalists.

Already on November 6, the chairman of the Binance CZ exchange Changpeng Zhao (yes, the same competitor of FTX) published a tweet where he announced his intention to sell FTT tokens, which were received after Binance's exit from the exchange's equity capital, for $600 million. At the same time, CZ noted that this is not a war against a competitor, but only a "fight against risks", which Binance learned after the situation with the famous Luna. The community did not like this comparison, because this forecast, according to users, is too pessimistic and inappropriate, because FTX directly competes with Binance. 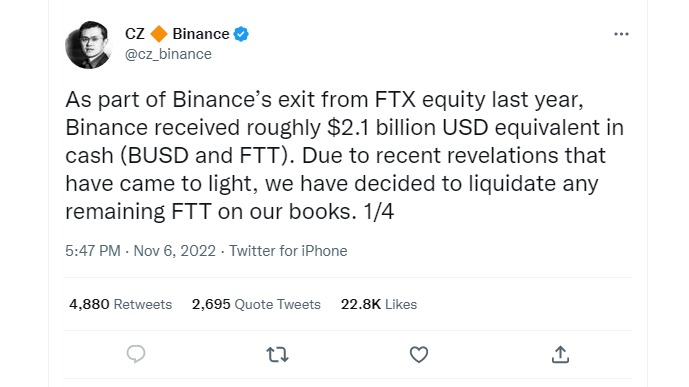 It should be noted that Changpeng, in order to prevent the FTT rate from falling, expressed its intention to sell its tokens through small transactions that will be carried out over the next few months. This "goodwill gesture" was not very well received by token holders.

After Binance CEO CZ tweeted about FTX, Carolyn Allison, CEO of Alameda Research, came into play with an offer to buy all of Changpeng's FTTs at $22 each, while the real rate was $24. CZ quickly responded to the tweet, explaining that an OTC transaction is not for Binance, because such an action contradicts the principle of a free market. Finally, the CEO of the exchange joked that he still keeps LUNA in his wallet, which is a kind of mockery of FTT and its possible (spoiler: real future) collapse.

Then Sam Bankman-Fried himself entered the arena, reporting on Twitter that "competitors are trying to spread false rumors about FTX" and that the exchange's assets are "fine". According to him, the exchange has enough funds to support withdrawals, does not invest customer funds, is "heavily regulated" and has GAAP audits with more than $1 billion in excess cash as proof.

A third party has also entered the conflict, namely the Bybit crypto exchange. The fact is that a year ago, Alameda exchanged 3.36 million units of FTT tokens for 100 million BIT tokens, the utility tokens of this exchange. According to the agreement, the company undertook not to sell the received tokens in the next 3 years. However, it was Changpeng who spoke about a possible violation of the promise and the sale of BIT tokens by a hedge fund.

Users unanimously called Alameda to account, threatening to drain 3.36 million FTT. Already known to us Carolyn explained that the company has nothing to do with the sale of tokens, but she will be able to provide evidence only later. If the information about the sale of BIT by the fund is confirmed, it will be another proof of serious liquidity problems of both Alameda and FTX. 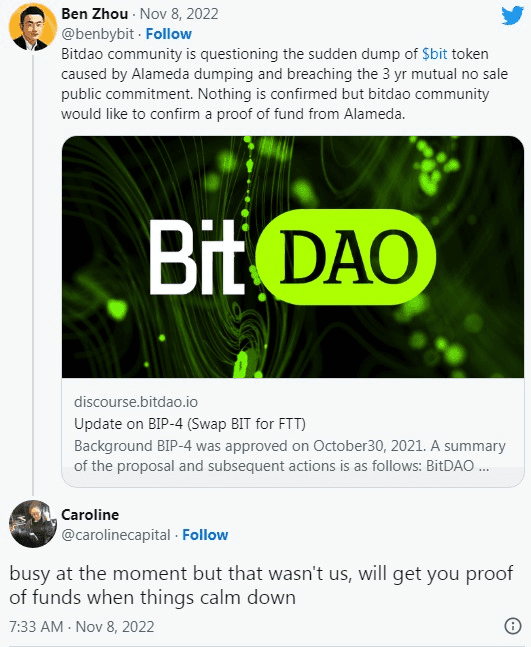 What happened to FTX reserves?

Recently, it turned out that the FTX exchange took out an $8 billion loan secured by Solana, FTT, SRM and other tokens, which are illiquid. This means that in the event of the exchange's collapse, a strong drop in the rate of these altcoins should be expected. In addition, Alameda Research has also invested in 184 projects, most of which are altcoins that will fly in the opposite direction from the moon.

The opinion of the majority of users on the situation still coincides in one thing – it's profitable for CZ to "remove" a competitor, and therefore it can deliberately fan the flames around FTX to flow liquidity from the exchange to Binance.

It is also worth mentioning that before the chaos began, SBF began to communicate closely with American politicians and regulators, which Changpeng could not achieve. According to Twitter users, Sam Bankman-Fried lobbies interests in Washington and the regulatory framework of cryptocurrencies in the United States, which is so annoying to the CEO of Binance. Changpeng believes that Sam simply "kills" DeFi and supports the repression of regulators against decentralized finance, when Sam himself sees the possibility of developing cryptocurrencies in the United States in cooperation with the authorities.

Quietly, while everyone was busy with the situation, SBF mobilized funds, and Alameda began to withdraw USDC from Circle. Such data was received by a Twitter user who analyzed the on-chain data. Already on November 3, after the publication of the Coindesk report, Alameda withdrew almost $500 million and transferred them to FTX accounts.

The beginning of the end, or how FTX blocked withdrawals

At the same time, users noticed an outflow of almost $300 million from FTX, while Binance recorded an inflow of about $336 million in stablecoins. With the outflow, FTT holders began to complain about problems with withdrawing funds from their wallets. FTX wasted no time and replied that everything was fine, there were no problems, and the slowdown was due to the exchange depositing hot crypto wallets. The general fear, panic and chaos led to a halt in withdrawals, the FTT token dropping from $26 to $14. Liquidation of positions at the time of November 8 reached $854 million. 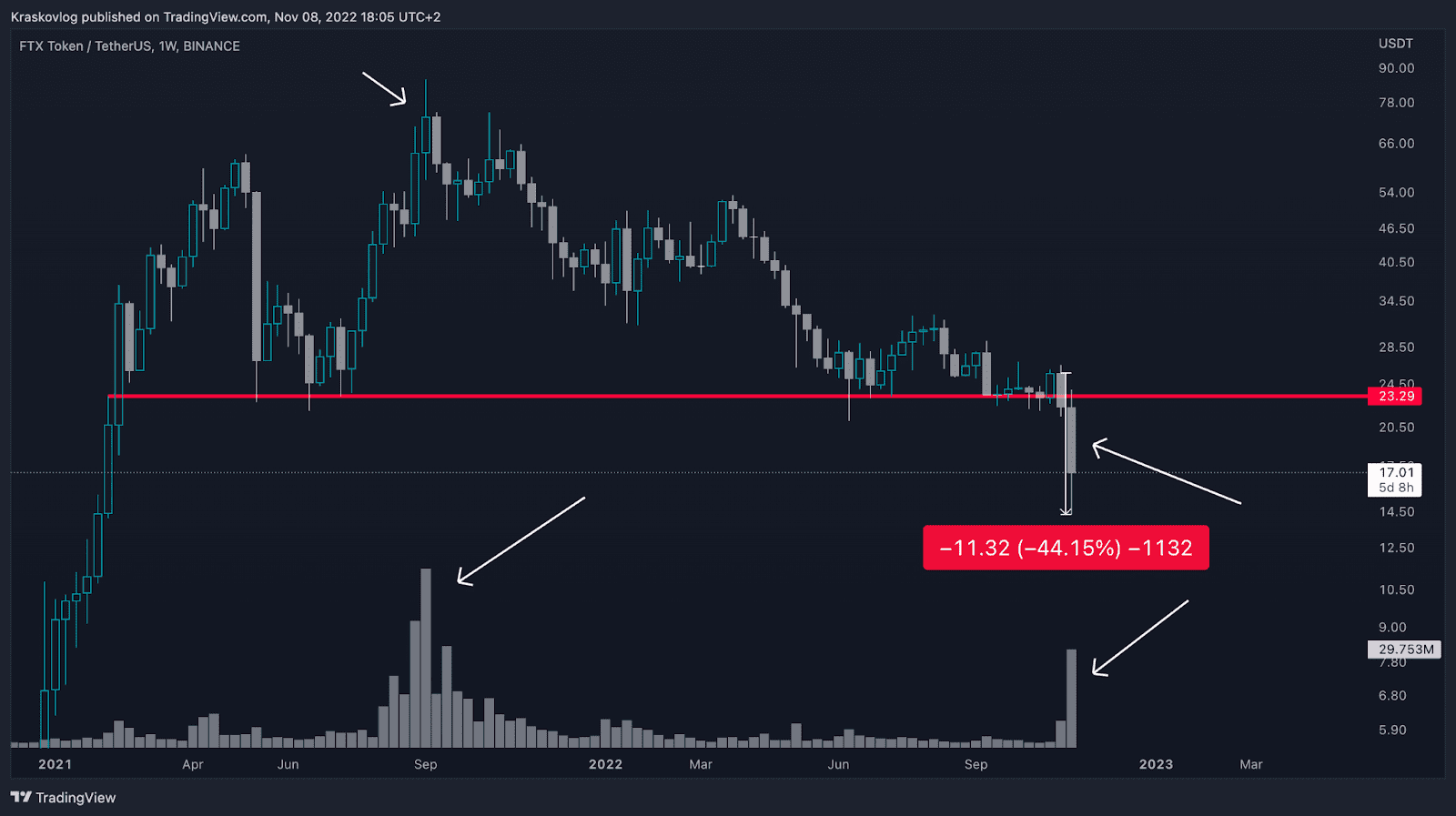 Watching the chaos, Changpeng unexpectedly announced a solution: since FTX reached out to Binance for help, Changpeng and Sam signed an agreement on the possibility of Binance buying the exchange outright in the future. According to him, a due diligence, or DD, will be conducted in the coming days to "save FTX'' and its token holders. 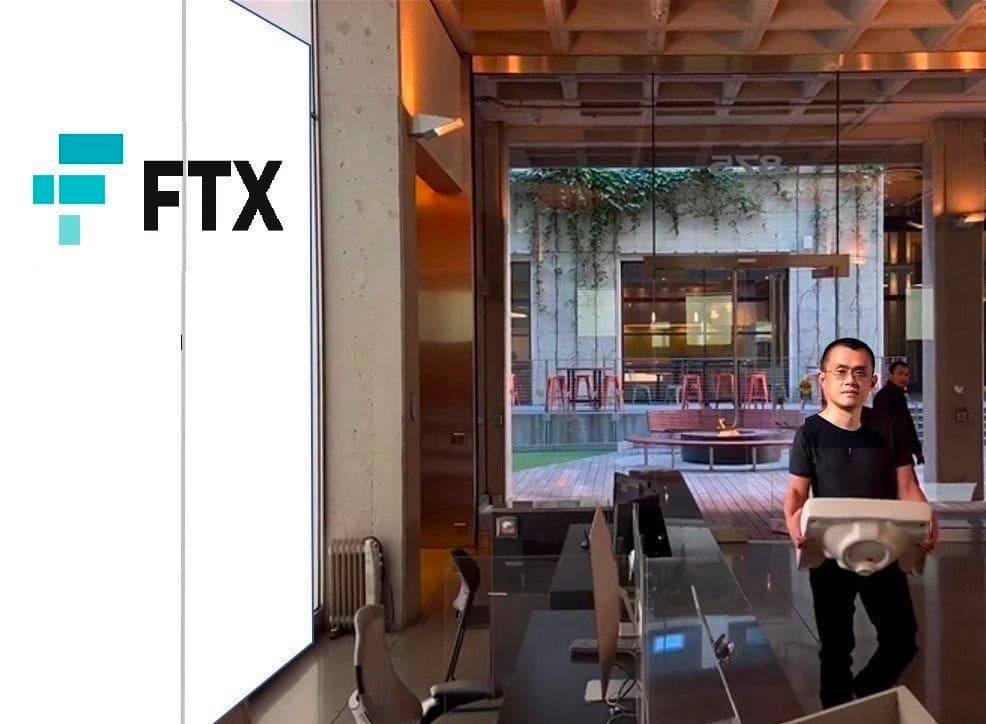 Sam also subsequently confirmed the deal and also assured that all withdrawal requests will be processed and funds will be refunded at a ratio of 1 to 1. He also added that despite the rumors of conflict and war between FTX and Binance, the latter still remained on the side of a decentralized economy and improved relations with regulators, and therefore FTX is now "in good hands".

But is everything as sweet as it was shown? After the news about the purchase of the Binance exchange, the cost of FTT rose by 40-50%, which was actually just a manipulation. Big players managed to sell their assets at a higher price, and immediately after that, the price of FTT fell into the abyss, dropping to $2.5 (the initial price before the situation was $25!). The chart below shows us how this actually happened and how influential media personalities (Elon Musk, Changpeng and Sam) manipulate the market for their own purposes. 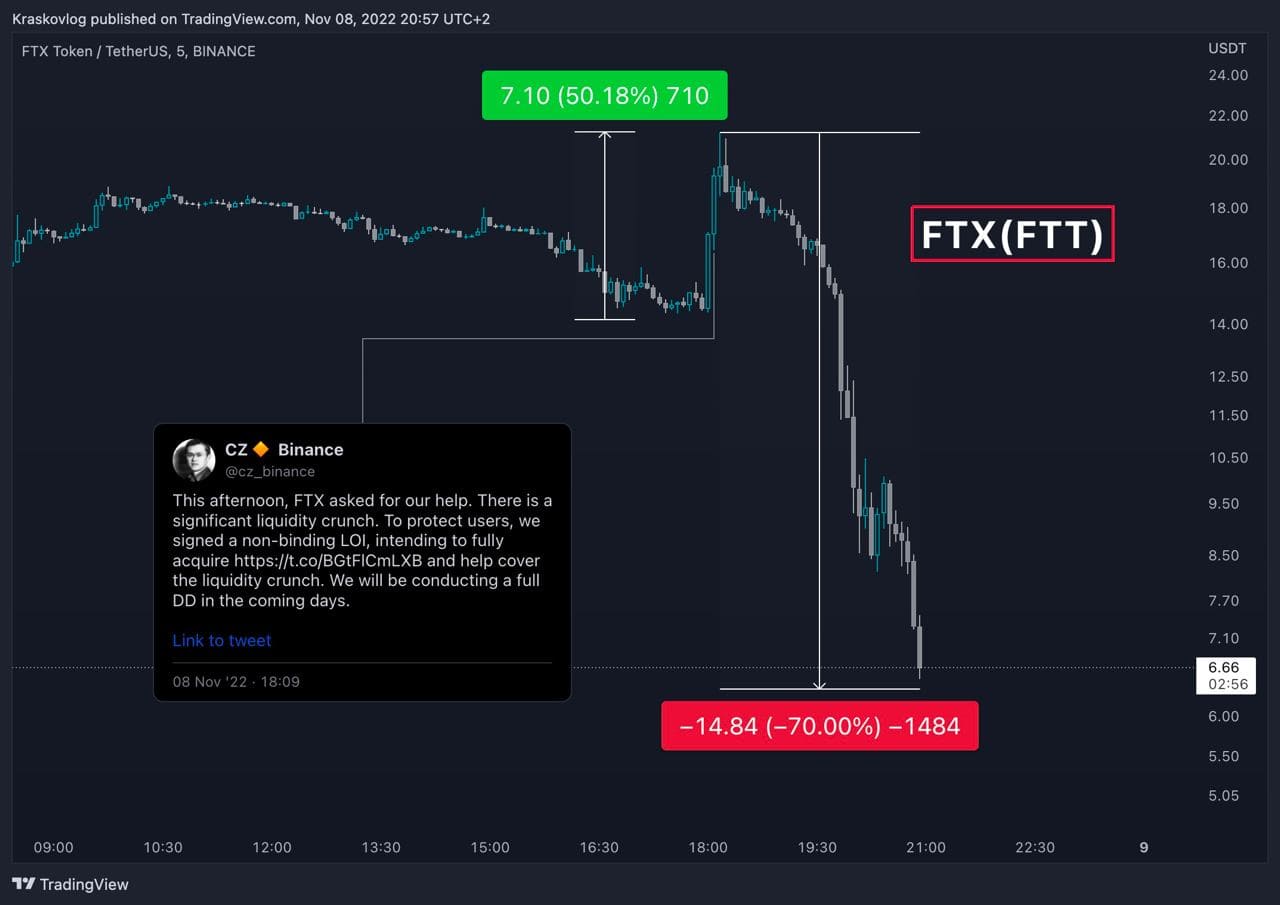 Summing up, we draw conclusions: 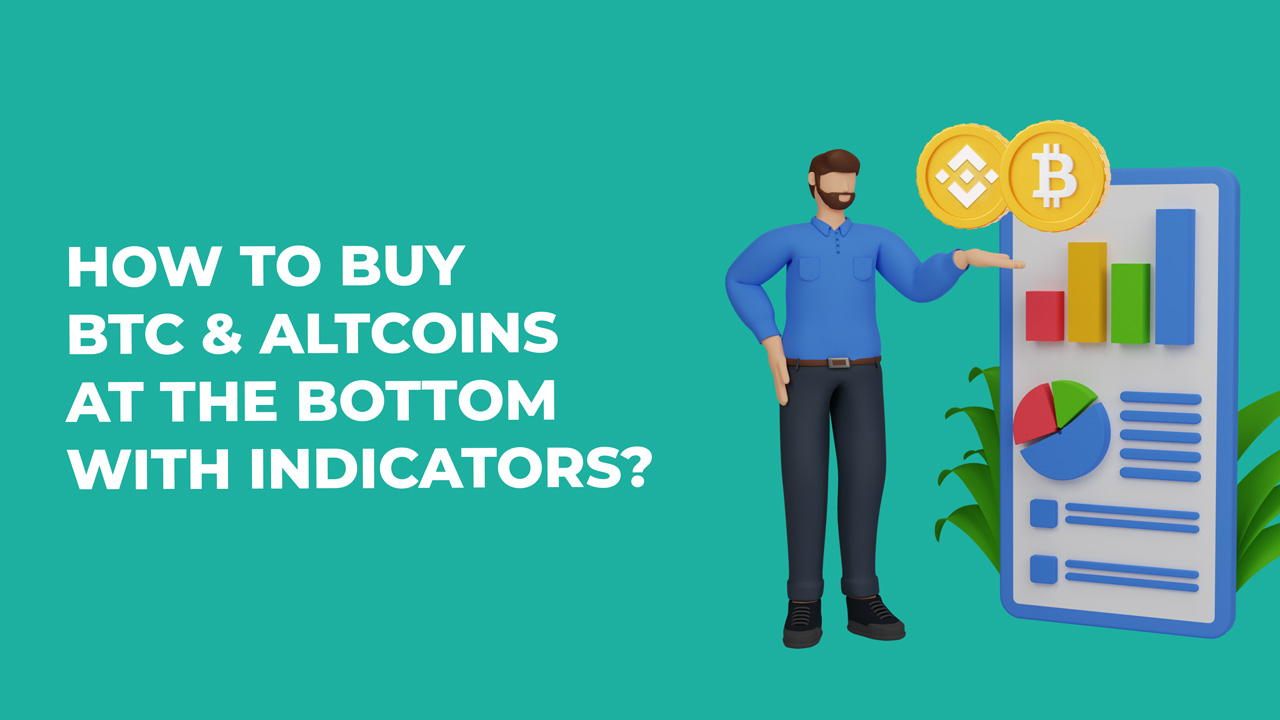 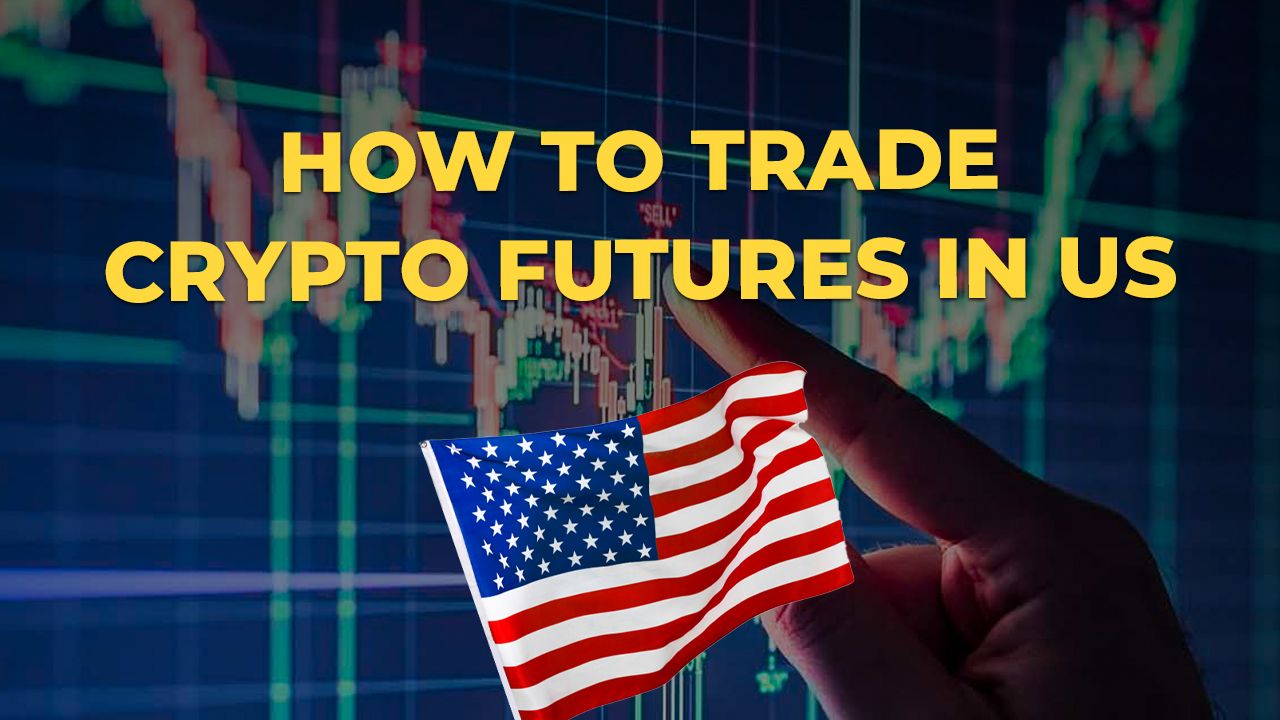 How to trade crypto futures in the US. The best crypto exchange with futures trading available in the USA

Binance Coin-M futures. What is the difference between Binance Usdt-M futures?